There are many flavours of DOS; the most common was MS-DOS but there were alternatives like DR-DOS, IBM’s PC DOS or 86-DOS and now there’s the likes of FreeDOS, the free DOS Project which is a modern Open Source variant. Now the machine I intended to play DOS games with was also to be the one I’d use to run early Windows 9x games. So the simplest solution was to just spend some time configuring the underlying DOS that’s included with Windows 9x versions.

Windows 98 Second Edition is what I intended to use so that meant I’d be using DOS version 7.1. The first problem arose here with some DOS programs checking for a minimum version requirement on launch, but errored out because 7.1 is not a recognised value. This is likely to be because most software was not updated beyond the last retail release of DOS (version 6.22).

Luckily the tool SETVER has been included with MS-DOS since version 5 to configure any programs looking for specific DOS versions earlier than the one you’re running. You can add a program to the version table with the following syntax.

The flag /delete or /D can be used to remove a program from the version table and /quiet /Q stops any message being shown.

To view all the entries on the version table you can run SETVER with no flags from the command line, this list can be long so you can use the “| more” option to paginate it. Once configured add SETVER to your CONFIG.SYS file using DEVICEHIGH.

When I first configured DOS I used Phil’s DOS boot menu from his very helpful MS-DOS Starter Pack along side his DOS Mode Super Easy guide. These are fantastic and give you a clean starting point for boot-up configurations for Conventional, Enhanced and Extended Memory options. This also covers the setting up of the ‘Exit to DOS’ shutdown option in Windows. A essential resource for new users it helps you understand how the autoexec.bat and config.sys files are structured and how the drivers and TSR’s (Terminate and stay resident programs) are loaded.

As time went on I customised this menu with additional boot-up configurations, these allowed for better support for hardware and in some cases led to a more stable system. The Microsoft provided default memory managers and drivers for DOS are HIMEM (Extended memory manager), EMM386 (Expanded memory manager) and MSCDEX (CD-Rom driver). These however can be a bit clunky and can take up too much space in the lower memory bounds.

I started using other memory managers and drivers so I could run games and software I couldn’t with Microsoft’s old ones, at least not without having an excessive amount of system boot discs. These new drivers and memory managers help to free up more Conventional memory while still having sound, CD-ROM and mouse support. Being able to use Write-Combining along side EMS and XMS to improve 3D rendering times. Also in some cases it made games work that under HIMEM and EMM386 were prone to crashes or not even launching. 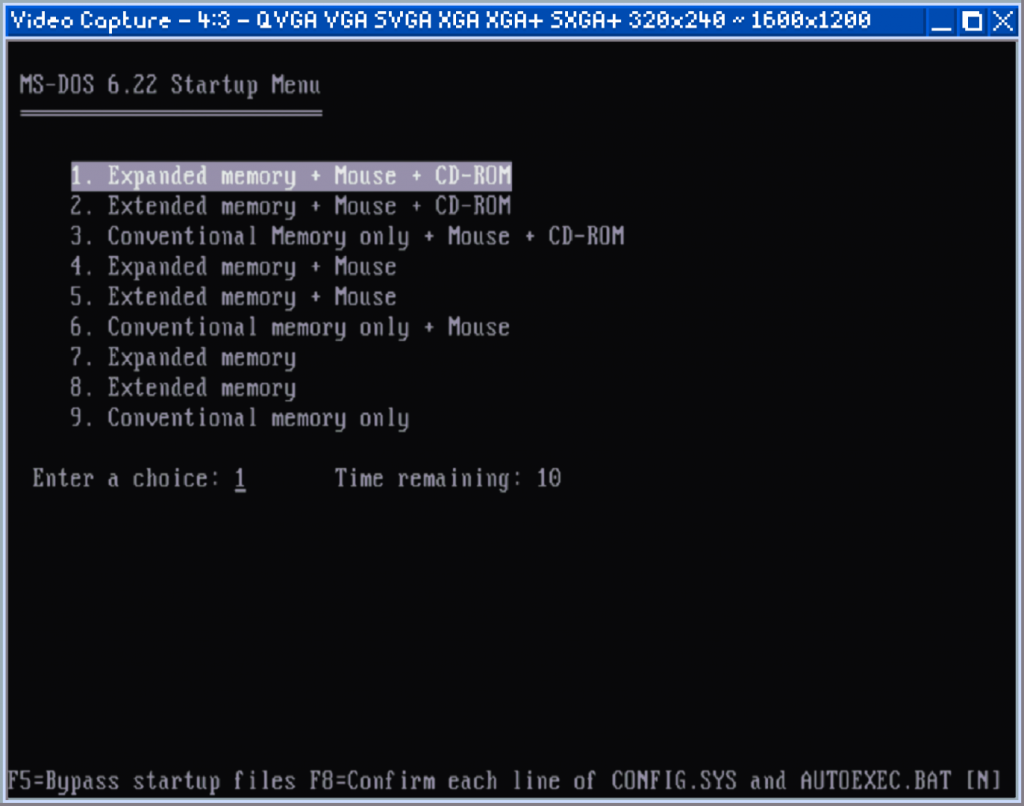