There are many drop in replacements for old DOS components thanks to the work of individuals or groups like the Free Dos Project. A fantastic resource is the Vogons Wiki page called Useful DOS utilities. I experimented with a range of Drivers, replacement TSR’s and Utilities until I settled on this combination.

JEMM386 – An Expanded Memory Manager replacement for EMM386 based on the source of FreeDOS EMM386. Made by Andreas Grech.

UMBPCI – A TSR which enables Upper Memory without switching CPU to Virtual 8086 mode. Handy for freeing up a lot of Conventional memory by loading other TSR to the Upper Memory while staying in Real Mode for older games. Currently maintained and updated by Uwe Sieber.

SHSUCDX – A Modern CD-Rom Driver replacement for MSCDEX, with caching, single-sector buffering and a smaller memory foot-print by Jason Hood.

CuteMouse – A replacement mouse driver. It is one of, if not the smallest memory foot-print mouse driver for DOS. It supports three button scroll wheel mice in DOS with very granular control over sensitivity. Made by Eric Auer and Daniel Nagy.

SetMul – A utility which changes the CPU multiplier, L1 and L2 cache operation on the fly within DOS for AMD K6+ processors. By gerwin on vogons.org. This is by far the most useful tool for getting older games to behave as they should.

k6wc/k6wcx – A utility for enabling Write-Combining on the AMD K6 by Uart. This massively speeds up 3D games. See this post I made previously on calculating your memory ranges and getting it to work.

Documentation for each of these utilities is included with the downloads from their respective sites. Most are quite simple to use and work in a similar manner to what they are designed to replace. However I have included copies of my autoexec.bat and config.sys because examples always help. These files will also contain my modified boot-menu.

A Quick Thanks
I’d just like to thank Philip Hoefer of Phils Computer Lab, Jack R. Ellis for XMGR, Andreas Grech for JEMM, Uwe Sieber and Andreas Stiller for UMBPCI, Eric Auer and Daniel Nagy for cutemouse, John H. McCoy and Jason Hood for SHSUCDX and finally all the folks at Vogons.org who keep these files alive, downloadable and documented. Without a community such as this my task would have been almost impossible. 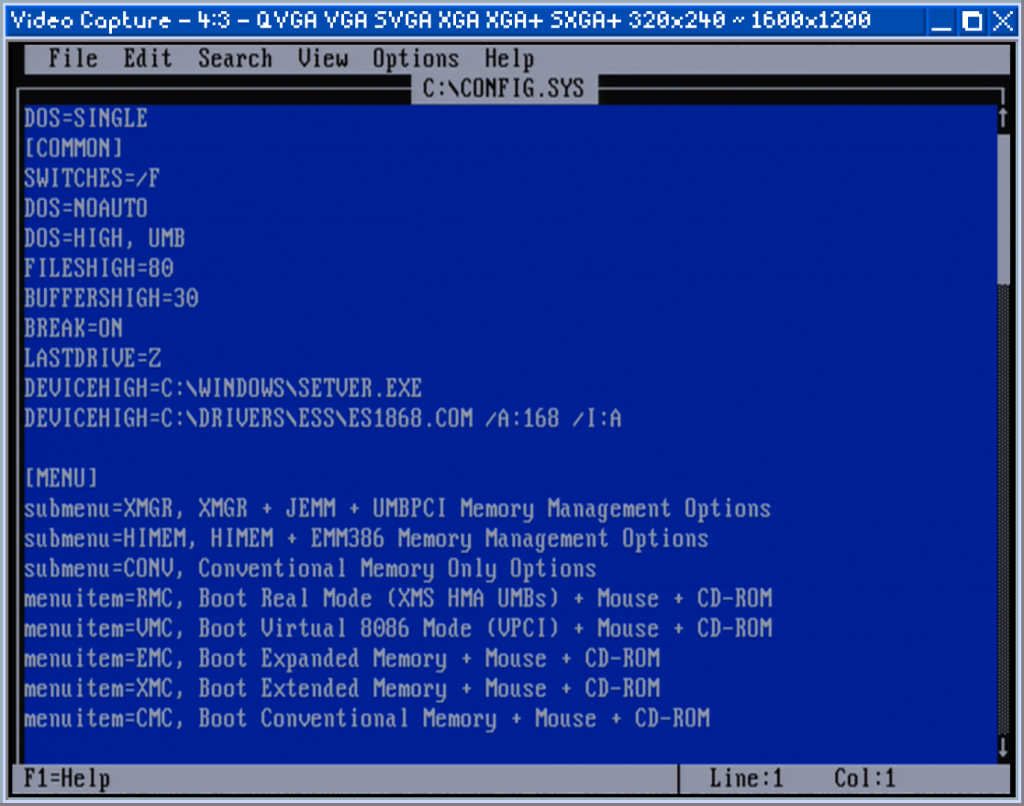 A zip file containing copies of my AUTOEXEC.BAT and CONFIG.SYS.