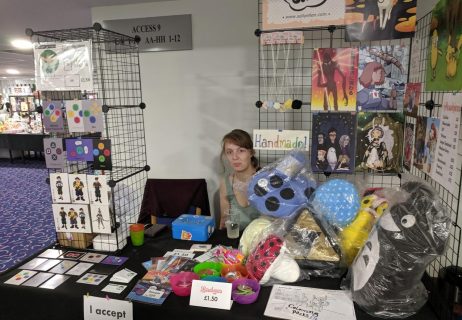 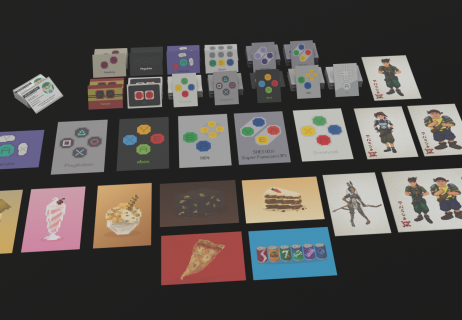 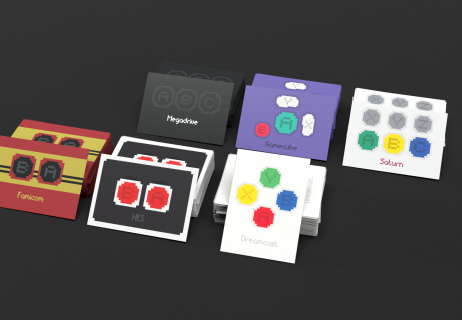 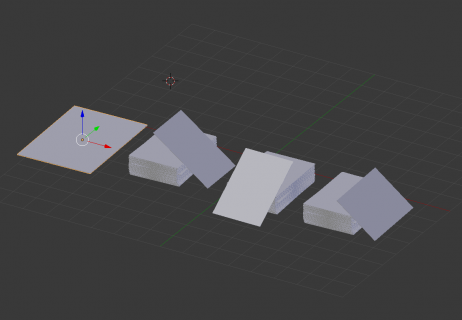 SunnyCon Expo in Newcastle has just come and gone and I shared a trader table with my partner Sarah for the 3rd time.
The turnout was fantastic and we did really well selling our prints and such. Looking forward to next year’s and having some new designs to sell.

Alas, I didn’t manage to get any good photos of my designs close up on the table, but I’ve been teaching myself the new Adobe Dimension program. With it I have created some renders which I think look quite convincing. I was able to create simple models of the cards/stacks in Blender at the correct proportions and import them into Dimension. I found Adobe Dimension to be simple to use but also a little buggy when rendering multiple models at once, and would error when trying to render more than 4 items at once. A simple way around this was to arrange all the models and then hide all but 4 at a time and compose the images together after.

This is the closest match I have found to my first ever joystick. The one I had was an even cheaper version of this stick with the same housing and body but only two buttons (red) and just had non moving solid parts for the extra body buttons and throttle control.

I bought it off ebay for cheap as it was only listed as old in box I wasnt expecting it to be in the best of condition. But on its arrival I was thrilled to find it was in fact New Old Stock still in its original factory seal!

As this was rather unexpected I decided to film the unboxing and take a few snaps. This model of the joystick launched sometime in 1993 and was a budget stick even for 90’s standards. I mostly remember playing Rebel Assault and Wing Commander III: Heart of the Tiger with my original stick.

An assorted collection of 218 glyphs and dingbats in true type font (ttf) format. Each character was drawn and vectorised by me. Most are tributes or simplifications of sprites from old games but some are originals. This is pxDingbats.

If your interested in using this font it’s available to download below for free for non-commercial use.
For a commercial licence please email me at licence@wtrjones.co.uk

Here are recordings from a range of titles all using the GUD v1 Soundbank for the X2 Dreamblaster. I’ll soon update the X2 to the newer v1.04 GUD sound bank and record new versions for comparison. All the tracks are recorded from a ESS Audiodrive with the X2 attached to the wavetable header using Audacity.

GUD Release v1.0 Playlists as MP3s
The Soundcloud playlist below are limited to only have a few example tracks. More extensive sets can be downloaded fromGoogle Drive in 320kbps VBR mp3s contained in .zip archives.

If you’d like to update your X2 to version v1.0 or any other version you can download the soundbanks available fromhere.

As a follow up to my previous post on enabling Write Combining in DOS to improve frame rates, here is how it can be done in Windows (9x).

To do this I’ll be using the program Central Tweaking Unit, which looks like this. Features from top to bottom are:

With CTU we can simply plug in the information we used in DOS into the MTRR0 row. In my case the address for the memory on my Voodoo 3 (C8000000), the amount of memory (16 MB) and the mode (Write Combined). CTU will use this information to calculate the “to ADDRESS”. Enable MTRR0 and press apply. The improvements are instant and no system reboot is required. The 2nd MTRR1 row can be used if you have two graphics cards to enable Write Combining on that card also, an example would be if you had a GeForce or Radeon AGP card for D3D and a 3dfx card for Glide in a PCI slot.

With Write Combining enables I see vastly improved frame rates in every 3D game I’ve tried. Turning Serious Sam from a stuttering slide show into a playable good looking experience. Another thing to note is I saw much better results using official glide libraries and minigl dll’s than with WickedGL.

Central Tweaking Unit is available to download from the VOGONS Vintage Driver Library.

The program SETK6v3 (SETK6D.exe for dos) will list available PCI Framebuffer addresses for the memory on my Voodoo 3 3000 (16mb). You can then use the program K6WCX to define them and the memory size which will enable Write Combing and thus a nice boost to FPS in benchmarks and games like Quake and PC Player Benchmark.
It should be noted that this only worked for me in Extended memory mode but not in Enhanced.

The “C8000000” parameter is the 2nd address reported by SETK6D which seems to be the one that works for me. The other being “CC000000” which although could be mapped did not boost performance.
The other parameter “128” is the amount of allocatable memory available multiplied by 8. In this instance 8 x 16 MB on the Voodoo3.

The performance boost gained is surprising and almost doubles frame rates in some cases.

Doom benchmark on max details for Fast PCs timed 2134 gametics in 495 realtics with out WC enabled and 2134 gametics in 517 realtics with.
To calculate that into fps its “35*2134 / realticks”. The opposite happens here and we loose some frames, with Write Combining off we get 150.8 fps but enabled only 144.4 fps.

A quick runabout in System Shock showed some improvement in 640×480 at max details, but the extent of improvement in other games requires more thorough testing.
So in summery it seems like a handy feature which is able to squeeze a little more performance out of those graphically intensive later 3D DOS games, if your CPU supports it.

None of this would have been possible with out links to the tools and a great breakdown of how they work from Phil’s Computer Lab, I suggest you check him out on youtube and grab the tools mentioned in this post over on his site. This is a simple low fidelity true type font (ttf) I made called pxSans.
It’s my take on making a simple ‘Sans Serif’ font that conforms to a 5px by 9px grid for each character.
This five by nine pixel grid is the area allowed for all glyphs on top of regular letters.
For instance, the bottom row of pixels is reserved for symbols like the underscore and the tips of descenders on letters like y and g.

If your interested in using this font it’s available to download below for free for non-commercial use.
For a commercial licence please email me at licence@wtrjones.co.uk